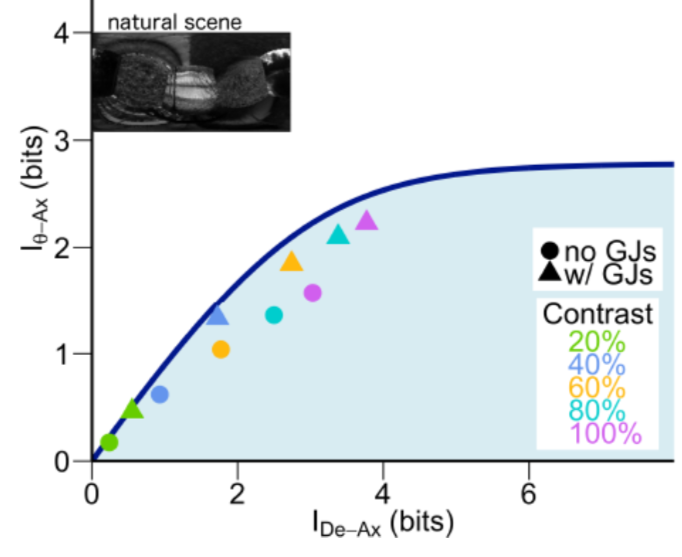 Understanding the computational implications of specific synaptic connectivity patterns is a fundamental goal in neuroscience. In particular, the computational role of ubiquitous electrical synapses operating via gap junctions remains elusive. In the fly visual system, the cells in the vertical-system network, which play a key role in visual processing, primarily connect to each other via axonal gap junctions. This network therefore provides a unique opportunity to explore the functional role of gap junctions in sensory information processing. Our information theoretical analysis of a realistic VS network model shows that within 10 ms following the onset of the visual input, the presence of axonal gap junctions enables the VS system to efficiently encode the axis of rotation, $\theta$, of the fly’s ego motion. This encoding efficiency, measured in bits, is near-optimal with respect to the physical limits of performance determined by the statistical structure of the visual input itself. The VS network is known to be connected to downstream pathways via a subset of triplets of the vertical system cells; we found that because of the axonal gap junctions, the efficiency of this subpopulation in encoding $\theta$ is superior to that of the whole vertical system network and is robust to a wide range of signal to noise ratios. We further demonstrate that this efficient encoding of motion by this subpopulation is necessary for the fly’s visually guided behavior, such as banked turns in evasive maneuvers. Because gap junctions are formed among the axons of the vertical system cells, they only impact the system’s readout, while maintaining the dendritic input intact, suggesting that the computational principles implemented by neural circuitries may be much richer than previously appreciated based on point neuron models. Our study provides new insights as to how specific network connectivity leads to efficient encoding of sensory stimuli.